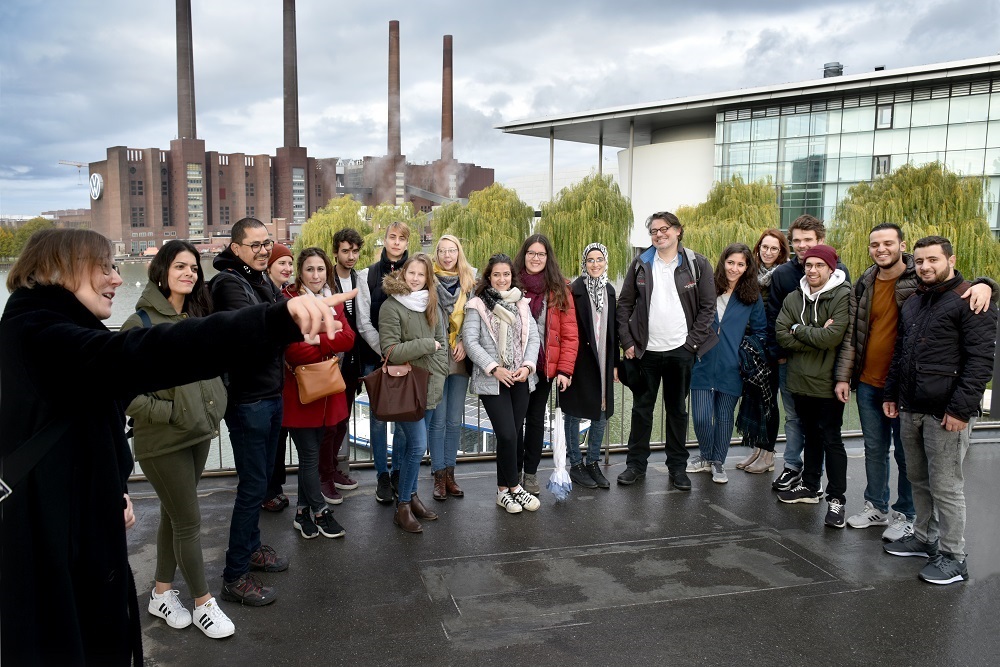 A competition of ideas

held by the City of Wolfsburg for innovative student projects on the theme
“Wolfsburg: City Space History”

Wolfsburg is one of the very few newly founded cities of the 20th Century in Europe. In a unique way, its city planning has been tied to the political, social and economic trends and upheavals of the past eight decades. The growth has run parallel to the emergence of the Volkswagen factory from individual auto production facilities into a globally active company. The time between 1951 in 1972, meaning the epoch of postwar modernism, is viewed as its most exciting time period from an architectural standpoint. Other attractions are outstanding individual examples of architecture that architects such as Alvar Aalto, Hans Scharoun und Zaha Hadid realized in Wolfsburg and that must be respectively understood as the impetus for new areas of city development.
The WOLFSBURG AWARD is intended to help further strengthen the architectural-cultural dynamism of Wolfsburg as a model city. About fifty years after the high point of postwar-modernism, many individual buildings and residential districts are facing modernization. The principles of a modern city suited to the automobile are being increasingly called into question. New urban developments will be generated, especially in housing. From 119.000 inhabitants in the year 2007 an increase in population up to over 130.000 in the year 2025 is expected. At the moment the city has approximately 125.000 inhabitants.

This is an open competition of ideas designed for students. Contest entries are submitted anonymously. Participation is open to all students in a master’s degree program at a European university. The prize will be awarded every two years. The sponsor reserves the right to restrict the range of topics or to temporarily suspend the competition. Guidelines for the competitive process are set in coordination with the architectural advisory board of the City of Wolfsburg.

SPECIFICATIONS FOR THE COMPETITION

The potential entries are not limited by topic. Their range is defined by the fields of urban and landscape planning, building construction, building history, historical preservation, structural engineering/structural framework planning, as well as a set of themes: “City Space History.” There is a desire for contributions that further develop the architectural and urban development qualities of the City of Wolfsburg, works that grapple with the special history of its emergence, and new models for further consideration. Value is placed on innovative or experimental approaches that promise new stimuli. The limits of technology and thinking can be plumbed. Work with interdisciplinary results is especially welcome.

The jury consists of the architectural advisory board of the City of Wolfsburg and one or more alternating guest jurors. Guest juror in 2022 will be Prof. Sabine Müller, co-founder of SMAQ architecture urbanism research, Berlin. Sabine Müller studied at Kassel University, Columbia University and at the Graduate School for Architecture Planning and Preservation in New York. After working in New York and Rotterdam, she and Andreas Quednau founded SMAQ in 2001. During her longtime international academic teaching activities she teached at Karlsruhe State School for Design, Delft University of Technology and Karlsruhe Institute of Technology. Since 2015 she is a Professor for Urbanism at the Oslo School of Architecture.

The city’s architectural advisory board currently consists of the following persons:

Kai Kronschnabel, chairman of the planning and building committee
Wolfsburg

This offer of award is directed at students in a master’s degree program in the subjects of urban development and planning, architecture, landscape architecture and planning, historic preservation as well as the arts who must be registered at a European university, college or institution of applied sciences at the time of the completion of their work. Their enrollment must be substantiated with the appropriate certification from the faculty. Submissions are also allowed from technically related courses of study. In this case, a request in writing for permission to enter the competition must be submitted in due time before the submission of the competitive entry. The request must be directed to:

The architectural-cultural working group makes the decision on authorization. The participants may be individuals or working groups. Work can only be submitted if it is not more than 24 months old. Each participant or each group may only submit one work. Multiple submissions from individuals or from working groups or merely individual members of working groups will lead to the exclusion of all participants. In the case of working groups, every member must be entitled to participate. A violation of these terms of participation may lead to expulsion from the process, even after the fact. The repeated submission of the same work is excluded. No works are allowed to be submitted that was developed in the faculties or the departments of an instructor serving on the jury. By taking part in the competition, participants agree that the submitted work will become the property of the sponsor, will be publicly exhibited and discussed, will be reproduced in document form or for archiving, and will be stored. Participation also entails the agreement that the sponsor can publicize the entries or portions of them, including the naming of their composers. When possible, the designs will be passed on to the planning area for further use. The drafter retains intellectual property rights.

The deadline for the competition entry is Friday, August 12th 2022. The entry must be marked with the identifier "Wolfsburg Award 2022" on the packaging and can be personally submitted to the following address on that day between 9 a.m. and 4 p.m.:

As an alternative, they can be delivered to the above address by mail, railway, or another transport company. The time of the final delivery is considered to be the date and time indicated on the confirmation of receipt (personal delivery) or the date of the postmark or the date on the delivery certificate of another forwarding service, irrespective of the time of day. The proof of a timely delivery must be submitted in original form at the request of the sponsor after the conclusion of the procedure. An entry that fails to meet the deadline or the lack of proof of timely delivery may lead to exclusion from the process, even after the fact. Entries that were in fact submitted in a timely manner but have not reached the sponsor 14 days after conclusion of the process can no longer be considered. The drafters themselves have the responsibility to ensure their on-time arrival at the sponsor’s location. To ensure the anonymity for shipments by mail or other transportation service, the address of the sponsor should be used to indicate the sender.

ITEMS TO BE DELIVERED

The competition requires plans/drawings/graphic representations, which cannot exceed a maximum of two DIN A1 sheets in size, as well as a CD with a printable file (see instructions). Textual explanations are to be arranged on the plans/drawings. Graphics and textual explanations that go beyond the required items are excluded. Other media, such as film/video, models or the like, that complement the plans are welcome and may also be submitted. Film- an video-material may not be longer than 2 min. However, these materials cannot replace the mandatory items (plans/drawings measuring 2 DIN A1 sheets). The languages of the competition are English or German. The sponsor recommends that no originals be submitted. Entries cannot be sent back.

The submitted work can carry no indication of the identity of the drafter(s). In all sections, the entry, including the envelope for the declaration(s) by the drafter(s), is only to be labeled with an identical, self-selected code number consisting of six Arabic figures. It is to be affixed in the upper right corner, 1 cm high and 4 cm long. The additional CD for the documentation must be sent separately to the sponsor and must contain a PDF file of the plans. The CD must carry the same identification number as the plans. The attached “drafter declaration” form must be filled out by each participant in clearly legible form and in printed/block letters. The drafter declaration contains the confirmation that the drafter did the work independently and without impermissible help and that the work is the intellectual property of the drafter. This declaration must be signed in the individual’s own hand and must be countersigned by the supporting faculty/department. The form or forms (one per participant) must be attached to the work in a sealed letter envelope (marked with the 6-digit identifier on the outside). The participants must ensure that the public anonymity of their work is maintained until the award ceremony.

The competition procedure is carried out in accordance with the guidelines for planning competitions, RPW 2013 (version from January 31, 2013). The independent jury established by the sponsor selects a maximum of 10 nominations out of the entries from eligible drafters that were submitted on time and that were eligible for evaluation. One entry will be honored with the "WOLFSBURG AWARD." Honorable mentions will also be given. The prize amounts for the honorable mentions will be distributed in accordance with the jury’s judgment. The WOLFSBURG AWARD has been allotted a total of 5,000 euros. The distribution is envisioned as follows:

The award and the acknowledgments take the form of a certificate and a monetary award. The nominated entries will be published in document form and displayed in an exhibition in Wolfsburg. All honored and nominated individuals are recognized in a award ceremony. If no entry is submitted that is suited for the award or for recognition in the opinion of the jury, the award of the prize or acknowledgments can be suspended as an exception or may be given out otherwise by unanimity. After the award ceremony, all the participants and the participating universities are sent the jury record to inform them about the outcome.